Ring in the New Year in Style, with a DJ, Live Band, Food and Beverages you will make this party one to remember. Let's shine some light on 2022, limited tickets available, click here to get yours today

Doors Open 7pm. Live band and DJ from 8pm-1am. Party into 2022 with the music of Sticks 'N Stones in the Joint, this bar is the place to be to ring in the new year! We want to Light Up 2022 and celebrate the end of this year in style. The casino also offers a great place to win prizes throughout the night. All around entertainment is available at Rideau Carleton Casino December 31, 2021 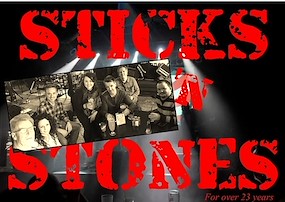 Watch your favourite Ontario hockey teams battle it out on the ice while competing in trivia with Liam Maguire, a noted LOCAL hockey historian. He is a published author, radio host and TV personality who is regarded as the foremost historian on the game of hockey. Get your favourite tailgate style food and beverages while testing your knowledge skills, be the ultimate hockey trivia expert (at least amongst your friends). Bragging rights, prizes (including tickets to an NHL game), food, beverages and hockey, what else could you ask for? The place will be electric with special events making the Joint the place to watch the game with style. Visit www.rideaucarletoncasino.com for more information

Tickets include a 12oz Draft and Buttermilk Fried Chicken Brioche. Prizes include hockey tickets, merchandise and more! Limited Tickets Available, get yours today!

Liam Maguire bills himself as the world’s number one NHL historian and trivia expert. “There is nobody on the planet who knows more history, anecdotes, statistics and trivia on the NHL than Liam Maguire.” –Yvan Cournoyer, former captain of the Montreal Canadiens, ten time Stanley Cup winner, HOF.Liam is a four time published author, with his last book coming out in 2019, titled, ‘The Real Ogie! The life and legend of Goldie Goldthorpe, published by Burnstown Publishing with a forward written by Bob Costas. His first three books were published in 1994, 2001 and 2014 and the forwards were written by Dick Irvin, Bobby Orr and Wayne Gretzky respectively. The books were trivia based with history and anecdotes on the NHL, more comprehensive and detailed than any other publication ever published. This is in keeping with Liam’s ability to add to the ‘rest of the story’ regarding great NHL players, moments and games.

Are You the Ultimate Hockey Trivia Expert? Come in and put that confidence to the test!

On February 2, 2020 we hosted Ottawa's Biggest Big Game Party in our new upstairs bar! The party was complete with a live Trews concert, cheerleeders, wings, beer and the BIG GAME.

Check out some photos from our latest events.